What if the keys to the metamorphism of carbonaceous chondrites were found …in the volcanic archipelago of the Kuril Islands, South Kamchatka?

Understanding the formation and evolution of the most primitive asteroids that populate the main asteroid belt is a crucial problem in planetary science; these objects being considered as the building blocks of the formation of our planetary system. The study of meteorites, in particular carbonaceous chondrites considered as rock fragments of these primitive bodies, has proved to be the most relevant approach. It is generally admitted that the parent bodies of carbonaceous chondrites were formed by accretion of primitive components of the protoplanetary disc: pre-solar grains, refractory inclusions rich in calcium-aluminum, chondrules, metal, ice, etc., during the first 10 million years from our solar system.

As the study of carbonaceous chondrites reveals, a large majority of their parent bodies have been affected after accretion by thermal (secondary) processes essentially linked to the disintegration of short-lived radioisotopes such as 26Al. This internal heat source caused the ice to melt and the mobilization of fluids which altered or metamorphosed to varying degrees the original chondritic material. Despite their obliterating role, the resulting hydrothermal mineral phases provide valuable information about the internal dynamics of primitive asteroids and the age of their accretion. If these hydrothermal processes make consensus, and are the basis of the classification of chondrites, the nature of the fluids involved (vapor or liquid aqueous phase), as well as the physical processes concerned and their timing are the subject of intense debates in the community.

In an article published recently in Science Advances, two researchers from the Observatoire de la Côte d'Azur showed that the mineral phases associated (incrustations) with the high temperature fumarolic activity of the Kudryavy volcano in the Kuril Islands (Russia) presented remarkable textural, mineralogical, chemical and thermodynamic similarities with the secondary phases of carbonaceous chondrites of CV and CO type (eg, hedenbergite, andradite, nepheline, sodalite). This analogy is a premiere. Following the principle of causality, it is suggested that the secondary phases of carbonaceous chondrites are, like the Kudryavy fumarolic incrustations, precipitated mineral phases resulting from the interaction between hot and reducing vapors percolating on a small scale (Darcy) with more or less homogeneous accreted chondritic matter of the parent body. According to the authors, these vapors could i) come from the progressive heating of parent bodies differentiated by the extinct radioactivities and from the devolatilization of the chondritic materials constituting them, or ii) remnant of residual local hot nebular gases at the time of the primary accretion CV and CO chondrite parent bodies.

According to this original work, the metamorphism of carbonaceous chondrites results from a hydrothermal activity of high temperature and of short duration, i.e., a few decades, affecting their parent bodies, and not of thermal event of lower temperature (aqueous fluid liquid) protracted event, i.e., hundreds of thousands of years, as currently considered. A better chronology of the chondrite accretion processes is however essential to progress in this area. The Idex-UCAJedi-Académie 3 and the Research Quality Bonus from UMR Géoazur are thanked for their support. 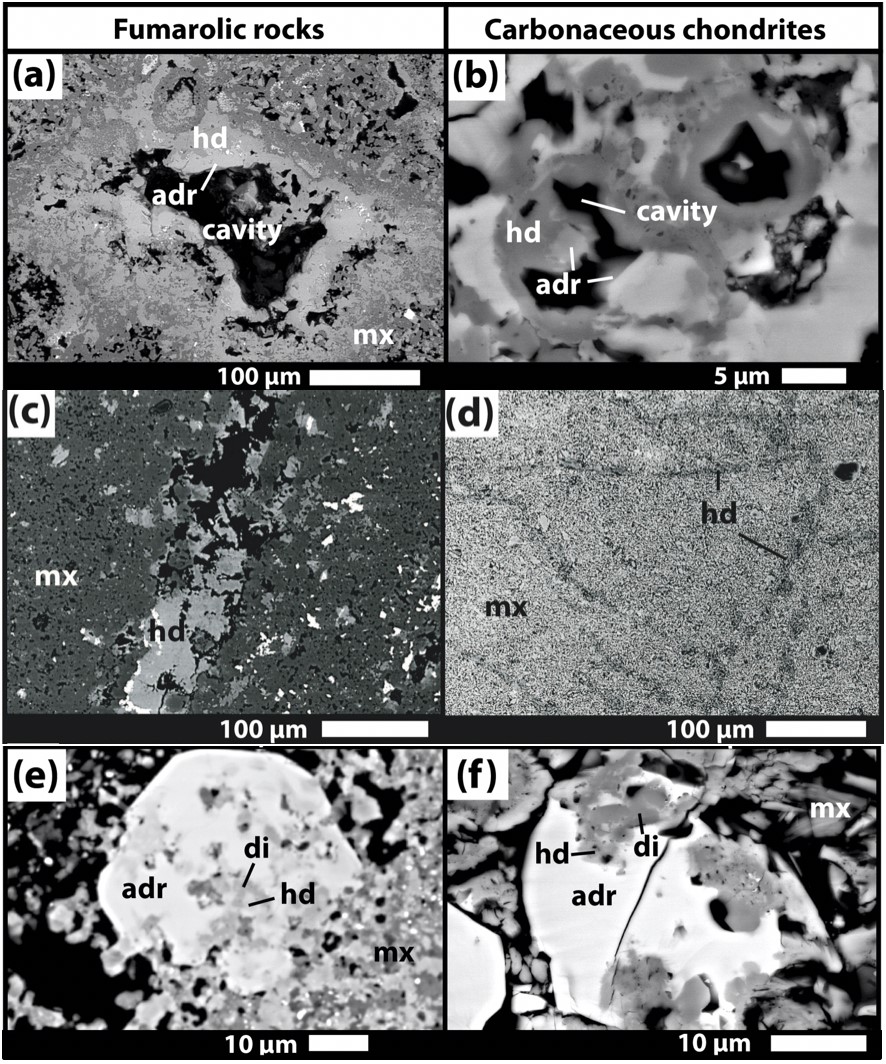 The same feature and minerals are found in fumarolic rocks and CV-CO carbonaceous chondrites, as crusted cavities (a and b), veins filled with hedenbergite within the matrices (c and d) and nearly euhedral garnets (andradite) as isolated patches in the matric and associated with Ca-Fe-Mg pyroxenes (diopside-hedenbergite) (e and f).